Why you need to customise your iPhone lock screen.

I have a friend who works for Apple and loves their corporate culture to the point of embarrassment (mine mostly). We were sitting in a smart London restaurant having brunch and discussing Apple products when I noticed that we had both placed our iPhones on the table in front of us, as had almost every other customer in the restaurant.  A quick survey of the tables revealed 14 iPhones and a single Samsung Galaxy on show. With a sample that small one shouldn’t leap to statistical conclusions, but I believe this impromptu survey conclusively showed that the iPhone is by far the preferred choice of the affluent residents of Westbourne Grove.

Nationally Android phones are outselling IOS phones, although the latter still enjoy numerical superiority in the smart phone market as they’ve been around for longer. In time this will change because iPhones are substantially more expensive than their Android competitors; I own an iPhone because I find that Android phones are a little clumsier to operate; this perception is reflected in industry handset satisfaction surveys which rate iPhones as the best by a margin of 10%, and I’m prepared to pay the substantial premium to own an iPhone 4 because I prefer the slicker operating system and the ease of use that comes with it. Many other people will take a more parsimonious view and opt for the cheaper handsets.

While I’m busy generalising one thing I noticed a few months ago when we had a surge of MacBook viruses was that Mac users are far more gullible than Windows users who have spent years living with security threats and as a result have become cautious in their surfing behaviour. Each of these Mac infections had been invited on board by the gullible user clicking on a ‘Yes’ button because if the web site was telling them that they needed to install a security scanner, then this must be true.

To test this hypothesis I explained to my friend that iPhones had a vulnerably that allowed me to change her unlock code (which I don’t know of course) while her phone was still locked.  She refused to believe this was possible until I took her phone from her, shielded it from view for a few seconds, and then returned it. When she tried to enter her unlock code it wouldn’t work, and although I reversed my hack a few seconds later she no doubt went back to the mother-ship where her reports of this security vulnerability may for all I know still be keeping teams of experts working long hours trying to replicate my feat.  My trick was simple – seeing that she was using the default Apple wallpaper on her unlock screen I waited until she went to the loo and then changed my own phone to use the same default wallpaper (predictably, I normally have a photo of my cat). When she came back I simply used some basic sleight of hand to swap phones. The real irony is that she didn’t notice that my phone is an iPhone 4, not a 4s like hers. So yes, gullible.

The moral of the story is make sure you personalise you iPhone wallpaper before your friends start taking advantage of you.
Posted by Peter at 15:05 No comments:

I was quite surprised to hear that we had been shortlisted under the customer service category for the Hammersmith & Fulham Brilliant Business Awards, not least because we didn’t lobby for this award because, if I’m honest, we’re all too busy to be that organised in our marketing and PR efforts. It was even more of a surprise when we were announced as runners up.

I haven’t a clue which of our customers went to the effort of nominating us, but whoever you are I’d like to say a big thank you! It was a thoroughly enjoyable evening in which ours and other small business were recognised for the contribution we make to our communities, and I’d like to thank Mayor Belinda Donovan, and  Nicki Burgess who organised the event.

Sometimes amidst the incessant turmoil of the day-to day running a business it’s all too easy to lose sight of where we stand with our customers, so something like this serves as an excellent reminder that everything we do comes back to customer service, and this award is a huge boost to our morale as a company. Today the skies may be grey and at 4pm we experienced something close to a monsoon, but there’s a bright patch of sunshine half way down Munster Road. 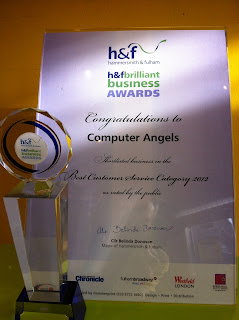