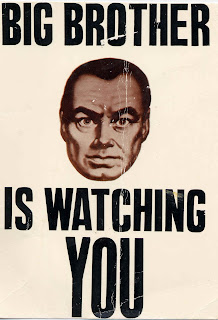 I was at school when I first read George Orwell’s 1984. In those days the spectre of the surveillance society was seen as a bad thing. Today for reasons that I really don’t understand, we seem on the point of entering that Orwellian twilight with minimal opposition from a society that once stood as a bastion in the struggle for personal liberties.
A fortnight ago public consultation on the Communications Data Bill closed. Otherwise known as the Snooper’s Charter, this Bill in now being scrutinised by the Joint Committee. There has been widespread opposition to this Bill, and rightly so; the proposals include keeping the details of every website you visit, every email you send and every call you make. Campaign group 38 Degrees collected over 180,000 signatures during the consultation period, and they are far from alone with MPs across the political spectrum being forced to listen to their constituents’ concerns. Yet if the government determines that it has sufficient political support I fear that these proposal will become law before this Parliament ends.
The legislation has its roots in the most benign of origins. In the early days of telephones the Police realised that a person’s phone records could hold valuable evidence, and as they were already being kept for billing purposes by the Post Office they were granted special powers to apply for access to this otherwise private information. As these records became computerised these powers were increased to encompass this new data, and the Police now see the widening of scope to encompass the internet and email as a natural extension of these powers.
Unlike the old telephone bills, however, these records are not already being kept in any detail, which is why this scheme will, we are told, cost £1.8 billion to implement (expect it to cost much more as usual). Also unlike phone calls, my use of the internet, and the sites I visit are my own business, and this natural privacy is being infringed. There are huge differences between making a phone call and visiting a web site, not least in the fact that I might make a few dozen calls in a day, yet visit several hundred web pages, including ones which might relate to my banking, health, or political persuasion. There is a balance between our right to privacy, and the need for security, and this Bill abjectly fails to respect that balance.
Another major concern is that huge volumes of data are to be collected, but who is going to keep this information secure? With our government’s woeful data security record I wouldn’t be the least bit surprised if this data ends up being as useful to the Chinese government as it is to ours.
Sir Tim Berners-Lee, founder of the World Wide Web has spoken out against the bill: "In Britain, like in the US, there has been a series of bills that would give government very strong powers to, for example, collect data. I am worried about that."
Wikipedia co-founder Jimmy Wales (who I had the pleasure of meeting at the inaugural meeting of ORG a few years ago) gave evidence to a parliamentary select committee on the bill on Wednesday, described the legislation as "technologically incompetent"; "It is not the sort of thing I'd expect from a western democracy. It is the kind of thing I would expect from the Iranians or the Chinese”
I cannot see a public interest in these proposals, however in the truest traditions of Newspeak I expect the government to announce any day now that they have decided to proceed with this Bill in the name of freedom and democracy.
Posted by Peter at 19:48