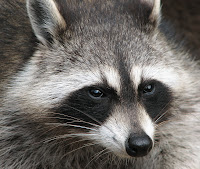 When Google Maps added ‘treasure’ to their ‘map’ and ‘satellite’ views I’ll admit I was taken in completely. I thought that the locations were for Easter Egg hunts, based on the fact that the treasure marker closest to me was at the same spot as a local egg hunt. I'm still not sure if it really was an April Fool but the consensus seems to be that it was.

Google + Easter have caught my attention a few times in the past week or so. Last Tuesday it was reported that the word "ungoogleable" was to be removed from a list of new Swedish words after a dispute between the search engine giant and Sweden's language watchdog.

This spat got me thinking about how we use Google, and what makes something difficult to Google for.

A few months ago I was trying to track down an old TV series that I remembered from my youth that featured a very clever computer called Box. This was more than an idle search – the voice interface between Box and its owner was, as I remembered, similar to the voice interface used by Apple’s Siri. By demonstrating prior art it’s possible to stop corporations from destroying any chance of innovation by limiting their ability to patent anything and everything they can. But enough about our horribly flawed patent system – my problem was that armed with a common word like ‘box’ I couldn't frame a sufficiently specific search term, so here was a question that was a perfect example of "ungoogleable". In the end I had to resort to posting messages in a science fiction forum, and within hours a helpful member had told me exactly where to find Star Cops, which I ended up watching all over again. And Box was indeed just like Siri, only smarter, and slightly less smug.

Usually I'm pretty good at Googling for  things and I've learnt many subtle Google-specific techniques that allow me to search effectively; it’s a real skill, and one I'm far too quick to exercise whenever I need a question answered. But of course there are some questions that just don’t have answers.

Easter morning is an exciting time for my niece and nephew who live in California. It starts with an Easter egg hunt in their garden, followed I guess by gorging themselves on chocolate until they feel ill. Imagine how distraught they were to find that the local raccoons had beaten them to the gorging part. I don’t know who I feel sorrier for; the poor raccoons who must have been feeling ever so ill; my sister who somehow managed to  stop herself from laughing out loud at her children’s distress; or my poor niece and nephew who were in fits of tears.

My niece is now 8 and is a technically savvy as most children are these days. Her reaction? She went to the computer and Googled “"What do you do when Raccoons eat your Easter Eggs?" Which is another perfect example of a question that Google just can’t answer. 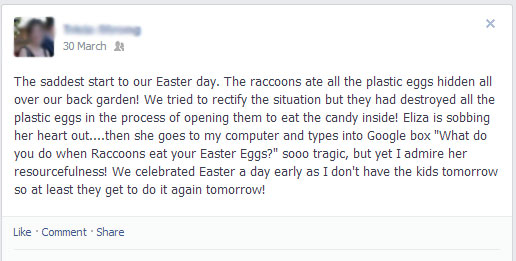