The Link Between the Olympics and Data Loss 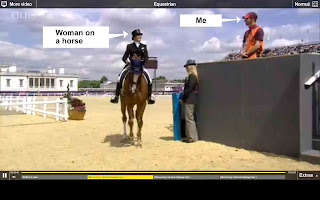 As some of you might have found out from my Out of Office reply, I’ve just finished a two week stint at Greenwich Olympic Equestrian Centre as a Games Maker. As holidays go this was incredible. Not only did I get to watch many hours of equestrian eventing (which isn’t something I would have considered exciting two weeks ago),  I also got to work with a team of highly motivated and enthusiastic volunteers who were dedicated to helping make the experience of the general public as amazing as possible.

There are lots of parallels that I could draw between my role as a Games Maker, and my role at Computer Angels; both are essentially customer service roles, and in both I get to work with people who are enthusiastic about what they do, although sadly I’m required to pay my own team of Angels.

One interesting facet of my Games Maker role was that of photographer – not officially of course, but over the two weeks I must have offered to step in hundreds of times when members of the public were taking photos of themselves in and around the arena.  Taking this smallish sample I can draw the following conclusions:

1. Approximately 60% of people at Olympic venues now use their phone as their camera.
2 Of those iPhones outnumber Android phones by a factor of approximately 3:1
3   There’s somebody out there who still uses film.

Having been exposed to so many iPhones I was also surprised at how many being used had cracked screens – I suspect that this has something to do with the cost of replacing the handset – phone screen repairs should cost under £100, but if you don’t know this or if you are on a budget you may opt to wait until you are eligible for your next upgrade, and just live with the cracks.

Anybody with a recent iPhone using iOS5 will know that one of the great advances in photography is down to the use of the volume-up button  to take photos. Previously you had to hold the camera with a thumb and finger of one hand and then poke a small icon on the screen with your other hand. If you were taking a one handed photo of yourself then your chances of holding the camera on one hand and coordinating a single finger from the same hand onto a small spot on the screen that would now be facing away from you were vanishingly small. Apple solved this problem with the volume button feature on iOS5 nearly a year ago, and I’ve got used to using the button rather than the screen which meant that when I was presented with an iPhone 4 or later I’d try using the volume button to take the photo.

Here’s the surprise; less than half of the phones I tried this on had been updated, which meant the button didn’t work. Given that the same update included the ability to install subsequent updates without connecting to a computer, this means that many  of these phones had not been synced in nearly a year or more. Which in turn means that they had not been backed up in nearly a year or more. Now cross reference this information with the bit about the broken screens, and one would infer, a tendency to drop their phones, and you’ll see a potential for a lot of lost phone numbers.
Posted by Peter at 12:34 No comments: