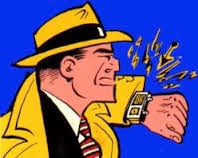 Who knows? After spending most of my life wanting to be like Dick Tracy, maybe what I'm really going to be reminiscing about in the future is my good old analogue watch.
Posted by Peter at 13:49 No comments: