How Computers are Creating a Lost Generation 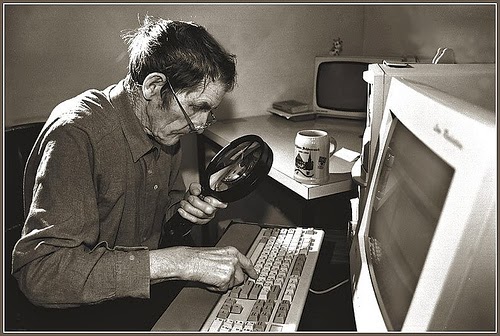 This post has been a while in the making – it’s a subject I first thought about covering when Fred, one of our long standing and well liked customers started passing beyond the point of understandable confusion with the ever-changing digital world, and regressed in a few months into crippling and overwhelming dementia.

It’s a tragic thing to watch; Fred enjoyed a successful career and headed up a French property group before retiring. He had much in common with the  large number of seniors amongst our clients, many of whom came to computing late in life, but still managed to embrace it with enthusiasm. We are terribly proud of them, and I’m happy to say that usually the sequence of events isn’t as dramatic as Fred’s but I’m sure we see a side of computing that those who write code are rarely exposed to – after all that’s a young man’s world, and the last thing they are concerned about is anything that interferes with the pace of progress. I should know - I was once one of them.

These days I realise that I am now no longer part of that generation because I’ve failed the PSU test – it’s a simple metric – I can officially no longer read the power rating  labels on laptop power supplies without reading glasses, and the same goes for most of the serial codes and the badly etched lettering you find on motherboards.

Fortunately I’m still able to use my screen at native resolution, but I know from my clients that eventually I’ll be forced to step it down to be able to read it – and that’s where another set of problems start. A few weeks ago I dropped in on another of our senior clients who was unable to print PDF files. I assumed this was a user problem, but as it turned out it was actually an Adobe problem – their custom print dialog was so large that on a 640x480 screen that the bottom of the form wasn’t visible, and as this was where the OK button was the only way to print was by using the TAB button to get down to it; easy enough if you know this trick, but I’m still going to name and shame Adobe for failing to take into account the needs of poorly sighted users. Developers love updating their software, and one the things that I’m sure contributed to Fred’s decline was when Yahoo Mail rolled out their major revamp of the widely used webmail service. Developers probably don’t give a thought about moving buttons around on a page, but they should be aware that something as simple as a relocated print button can throw older users into total confusion – they lack the good eyesight that allows them to spot the newly located button in the first place, and they don’t have the same cognitive abilities as younger users that allow them to remember where it now is even if they do find it.

In a month Microsoft’s support for XP will officially end. It’s had a good run since it’s release in 2001 (and we conveniently forget just how bad it was in the early days), but things move on. Since XP we’ve had Vista, Win7 and now Win8, so it’s a long way behind the curve. I fear, however, that this will orphan two important groups – those who cannot afford to replace their computers with newer ones, and those who are unable to adapt to a new operating system. Stop there and imagine these two groups on an intersecting Venn diagram. Do you see the huge intersection, and can you guess the demographic?

I’m not sure that the end of support means the end of XP – after such a long run I suspect that most of the vulnerabilities have been discovered and patched, so hopefully any new vulnerabilities will be minor ones. I also suspect that the technical community will step up to the mark and introduce patches if they are required, and I think this is going to be important, as I see XP being used by a select group of older users for some time to come.

I’m not the only one who hopes I’ve got it right. Susan has suffered through a series of neurological problems and suffers from frontal lobe epilepsy; her ability to cope with even the smallest change on her computer is severely reduced by the cognitive impairment caused by her injuries, and worse still, the stress of trying to cope with something as simple as a revamped web page layout can cause her to have a seizure. As her laptop is approaching the end of its life, our solution is to take a new laptop and recreate her old working environment as closely as we can. With a bit of luck she should be using XP and Office 2002 until well into the 2020’s.

It’s time that we all woke up to the dangers leaving our parents and grandparents behind – there are lots of simple things that can be done, such as extending the legacy layouts of webpages like Yahoo mail, and simple things like testing page layouts and minimum resolutions, but it’s got to start with developers, so spread the word, because if we’re lucky, one day we’ll be old too...
Posted by Peter at 17:25 1 comment: