Windows 8 - Time to Get Excited 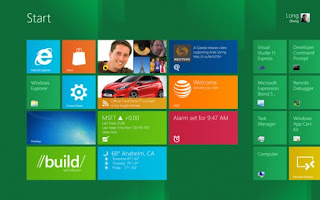 This week we met Windows 8 in the wild for the first time. I'm happy to report that the Angel concerned managed to survive the encounter, although it did take him a while to find the shut-down button.

A lot of pundits are being pretty negative about this release, largely on the basis that Windows operating systems have tended to follow a good-bad-good-bad sequence. This is a little simplistic; Windows XP is rated as good, but when it was first released in 2001 it was hardly fit for purpose. It wasn't until the release of Service Pack 2 in 2004 that it became usable, but people forget this because over time it became a stable and familiar platform. Windows 8 on the other hand is a radical shift in the way we use computers in the same way that Windows 95 was a departure from the old Windows 3.1 workspace.

Central to the new look is the ‘Metro’ interface. It isn't called this my Microsoft any more for IP reasons, by the way,  but the name seems to have stuck, and as everybody is getting tired of IP laws that are about as fit for purpose as Windows Millennium Edition I guess that’s what we’ll be calling it, and lawyers be damned.

As Windows 8 is part of our Microsoft  Partner Action Pack I decided to download a disk image and install a copy on a spare 5 year old PC we had lying around. Installation took an impressive 30 minutes, and having read a few starter guides I was quickly playing with my desktop tiles.

I love the clean look of this interface. As an iPhone and iPad user I'm beginning to realise how dated the iOS interface is beginning to look, and the ability to have real information accessible from the desktop finally seems to work, which is great news for anybody who ever struggled with previous incarnations of the Active Desktop in Windows XP.

What is most impressive however is way it integrates with a Windows Live ID. Once I’d figured out how to sign in using my venerable Live ID the PC immediately tracked down all my Live services and seamlessly integrated them with the desktop. Suddenly end effortlessly I was able to read my email, store my documents on my Sky Drive, and best of all my profile settings, including all those little preferences that personalise my computing experiences synchronise with the cloud, so that as soon as I sign in on another Windows 8 PC using my Live ID I get my own working environment, bookmarks, email and all.

This is a monumental achievement because it means that with the minimum of effort, and in under an hour, I have installed a complete cloud computing solution. Think about it; I'm using a very old Hotmail account that has been migrated to Outlook.com which is impressing me hugely with its speed, usability, and above all the walled garden approach it’s taking to spam management. Even ignoring the 2000-fold reduction in spam on this account, the fact that I have a cloud based email account that is finally able to reliably synchronise my email and contacts across devices painlessly is fantastic. My Documents can now be configured to live on SkyDrive which in turn can integrate with my phone camera, sync with My Music, and in fact sync pretty much everything.

Suddenly any computer (even my 5 year old test bed) becomes a simple appliance which lets me connect to what matters – my data. And it’s all safe and sound in the cloud; so as long as I keep my account secure I don’t have to worry about viruses, hard drive failures, or even burglars, because the PC has become easily replaceable.

Apple was previously leading the crowd with its iCloud services, but this has always been a finicky solution, especially if you are trying add PCs to your list of synchronised devices, which is a requirement for many of our clients. Suddenly Microsoft has pulled a game-changer out of the hat. It already has upwards of 80% of the user base for computers, and with the integration of cloud services as a core part of Windows 8, rather than something that has been tagged on as an afterthought, I would expect it to consolidate its position in computing, and then begin to make swift inroads into Apple’s dominance of the mobile and table market.

I first started programming a quarter of a century ago, and computer technology has always been an exciting ride, with world-changing innovations  touching our lives along the way, but it’s been years since I've been this excited about a product launch. Nothing here is actually radically new – I've been bitching for years about how poorly executed cloud services were. Suddenly, though, cloud computing has come of age, and Microsoft, who I thought were no longer able produce anything cool and exciting, must have the good folk at Apple shaking in their boots.

They shall grow not old, as we that are left grow old:
Age shall not weary them, nor the years condemn.
At the going down of the sun and in the morning,
We will remember them.
Posted by Peter at 18:38 No comments: