This month  I attended CeBIT in Hanover  which is famous for being the largest tech show in the world. I hadn't been for 10 years, and although the show is slightly smaller these days it still takes a full three days and a huge amount of walking to get around everything.

What's changed most since my last visit is the huge influence of mobile technology which can potentially make both the show experience and the ordeal of travelling there so much better.

While this is great in theory until recently it simply wasn't an economically sound proposition due to the extortionate data roaming charges, so I was very excited to read that O2, my mobile provider, were offering  something called O2 Travel which meant that I'd "never pay more than £1.99 a day for data".

You can do so much with a  smart phone when you're travelling. The BA app let me easily check in to my flight from my iPhone, and get reminded when it was time to board without waiting by a departure board. On my arrival in Hanover Google Maps with its excellent journey planner which includes public transport meant that I knew exactly where to go to catch my train to the city centre, and what time it departed. Then on arrival I was able to navigate to my apartment without a hitch. If I'd needed to, Google Translate would have let me 'speak' German too. 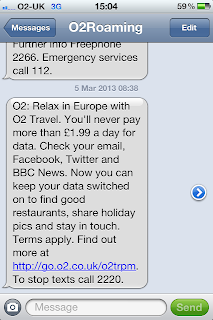 Early the following morning Google Maps again got me on the correct train to Hanover Messe, and I was happy to receive the following comforting message:

On the train I noticed that everybody was using their smartphones, and this continued in the many halls that make up the exhibition centre. On arrival  it was on to Dropbox to retrieve my booking details, and the official CeBIT App to find my way around; the 3G infrastructure capacity that it takes to handle that many simultaneous connections without speeds dropping was pretty impressive, especially when you realised that the official Wifi service at €10 an hour probably wasn't attracting many takers.

My first stop was the conference centre for the  keynote speakers including  Gary Kovacs, and it was great to be stay on top of my email and do a bit of light surfing while listening - until that is I received this: 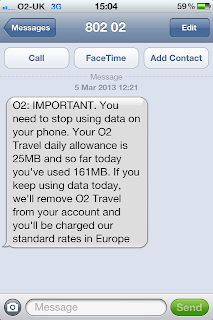 It was all going so well, but it turns out that the 25MB limit imposed by O2 simply isn't fit for purpose in the real world. After turning off data roaming for the rest of that day I carried out a few tests. It turns out that a single Google map search and a sync with my mail server (downloading message headers but not the actual content) took up 2Mb of my limit, and with no web surfing and email polling only I was up to half my limit by lunchtime. On their website O2 describe 25MB as being:

'Up to five hours of web browsing on a laptop.*

*These are all approximations and does not mean that this is what you will get.'

At least that last part is true.