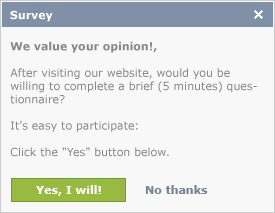 It seems every time I visit a website these days I'm prompted to fill in a survey.

Let's get one thing straight. I've nothing against feedback. We invite our customers to leave feedback every time we do work for them, but the way we do it is to send them a link that they can elect to click on that will take them to a nice, simple and short questionnaire. What we don't do is foist a huge pop-up over the top of the webpage they're on which they have to dismiss they want to proceed any further.

To say that I find this irritating would be something of an understatement; it's particularly galling when it happens on websites that I visit frequently, and where the option not to take a survey could at least have been noted so that I'm not prompted every couple of days (usually when I'm in a hurry to get something done), to once again let them know what I think. I do wonder who completes these feedback forms, and come to that, what they look like as I've never ever in all my time of using the Internet filled one out. For all I know they could be beautifully crafted questionnaires that offer you marvellous free gifts with every question answered. But somehow I doubt it.

I'm also curious to know if the majority of feedback that is left has to do about the irritating requests for feedback, which am sure must figure quite prominently on the list of negative criticisms of any site that offers visitors the opportunity to respond to a feedback survey. Clearly, if I'm right in this assumption, feedback is ignored as I haven't noted any reduction in the number of tedious pop-ups getting in the way of my work. I'm also curious to know what exactly this feedback is being used for; somebody somewhere is probably analysing the feedback data as a way of justifying their existence, but the cynical side of me wonders whether the process is simply about identifying people who are prepared to leave feedback in the first place, which will then allow them to be targeted for advertising, or more active sales activities, in an attempt to convert the respondents’ accommodating nature into hard cash (at their expense of course).

Sometime soon I'll have to accept a feedback request just to see what happens. Unless of course that's exactly what they counting on.

These days I do quite a lot of my surfing from the comfort of my sofa using a tablet, or on the move using my phone, and these these pop-ups reach a whole new level of irritation as I often fail miserably to dismiss them because the screen isn't large enough me to get to the ‘no’ button. It's a bit like the ubiquitous pop-up advert that is easy to get rid of using a mouse, but nearly impossible to dismiss by pressing the little cross in the top right-hand corner when you're using a tablet. I used to think that I was simply a really bad aim when it came to hitting the cross, but I now realise that this is just a cynical trick by the advertiser who, having identified that you're using a tablet, is going to take you to their website regardless of whether you have managed to hit the cross or not, and you of course will just assume that your aim was poor as usual.

All of these irritations pales to insignificance, however, when compared to my pet hate which is adverts in the form of videos embedded at the side of webpages that decide to pay themselves without any intervention from you. One of the neat features of Chrome is that you can at least see which tab the sound is coming from, but this in no way reduces the heinous nature of the internet crimes being committed by advertisers in their attempts to promote more rubbish. And if I'm beginning to sound like a grumpy old man I'd just like to remind our advertisers and survey monkeys that they're the ones that have driven me to this.